One thing that Kevin has learned, and I have told Kevin multiple times…about saving money is… for us personally, it was tires. For all of our off roading vehicles, Kevin has gone from 33s to 35s, to 37s, to 38s. Then, in our old Land Cruiser… to 40s, all within the span of five or six months. What I’ve learned is just straight to 40s. No. No, No. No. Instead, plan ahead. Figure things out. Take genuine time to sit down and think about what your ultimate goal will be. 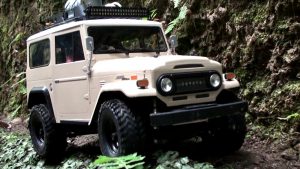 What are you going to do?

Are you going to tow with it at all? Will you tow with it ever? Towing is huge, and makes a huge difference in any modification. It’s about the type of off roading.

Which type of off roading?

I have a hybrid of an all-terrain to mud terrain, and they perform fantastic with everything because we drive across the country, thousands of miles, all while we’re towing.

Will you be driving on the road? Because if you want to drive it on the road, you don’t want to put Trepadors on there, or stickies. You would want to put something on that does well on and off road. If you’re trailering it, go all out.

You also have to think of other things.

Another thing people don’t realize is tire weight. I have C, D, and E-rated tires. Each one of those is going to be a heavier tire. Then there’s the thing about rotational mass. Rotational mass is three times that of standard mass. Just because something is only five pounds heavier, it’s not really. It’s five times three, which is fifteen, times four. Now, you’re actually sixty extra pounds, not just five pounds, rolling down the highway.

What Kevin usually says, although he doesn’t follow his own advice, is…   Buy once, cry once.

If you plan ahead, and you actually decide well ahead of time what the purpose of your vehicle is going to be, you can buy it one time. You can buy that modification just once, and be happy with it. We did. We started with a budget boost lift, and it did all right. It did fine.  Now we’re on our third lift kit.

Figure out what you want and buy it once, and be happy with it. Do your research. Plan ahead. Don’t go through seven sets of tires in five months, like Kevin did. Know what the purpose of your vehicle is, that way you can modify it accordingly. Also, know what your budget is. Doing so will help you not waste extra dollars.

Since you’re a wheeler, you won’t want to miss out on the biggest thing to happen since Moab 2019… E3 Offroad… launching soon.

You’ll get special extras no one else will receive when we launch.