A Brief Beginner Off Roading Guide

Off Roaders are from every walk of life, but there are two major groups:

First, there are those who go off roading in their beat-up 4Runners. Then those who take guided 4×4 Jeep tours, possibly ending with a glass of Chablis at sunset on the trail.

Both groups, however, are adventurers and see the journey itself — not the destination — as the reason they do what they do.

Eric Olsen, has been off roading for more than a decade. He  likes to practice with the dudes on day trips. Then he goes overlanding by himself, trips which usually run several days.

He has a few tips for beginner off roading. Experienced drivers can benefit from his insights as well. 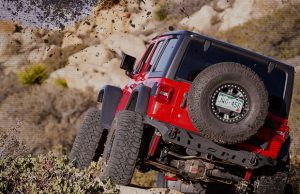 Olsen said, his first step to planning a trip is to “book everything ahead of time and plan each day accordingly.” With a destination in mind, he works out a route that lets him sleep in a motel every night and not have to drive after dark.

Sometimes, of course, even the best laid plans go south.

“Unfortunately, I only was off-road at night solo once. It was because I ran into a gate to private land that wasn’t indicated on any map. Then I got lost trying to double back. While I was still able was able to make it to my hotel, it was around 1:00 AM”when I arrived.

As a “frequent violator of the first rule of off roading (which is to never go solo),” Olsen keeps a few things in mind:

• Make sure you have a properly maintained rig.
• Use care, and don’t break the vehicle.
• Be prepared to turn around and take a route you know you can handle.

• Carry extra fuel, clothing, water and food for a few days.
• Bring two spare tires. Eric shares, “I used to run around with a tire repair kit. However, after using it once on a two-flat day, I stopped bringing it. It was hard to use. Now, I prefer the weight penalty of the extra spare.

• Carry self-recovery gear. Have a winch installed in the front bumper now, and carry four recovery ramps. In addition to, a farm jack with accessories. Plus, I carry a shovel, axe, and various straps and shackles and a snatch block.
• Experience also tells me, to carry a 12-volt jump starter, just in case, somehow, the battery goes dead through sheer stupidity.

In other words: “Bring it so you don’t need it is my rule.”

He adds: “If something really bad happens or you are running late, make sure you can communicate with the outside world. A two-way satellite communicator transmits a position every 10 minutes.

All so someone who cares about your status, can compare your location on an interactive map with what they know of your itinerary. You can also send and receive email via satellite. This way, they can help you get local help if necessary. If it all really hits the fan, there is the SOS button.”

One last thing. Remember the cardinal rule of off roading: “As slow as possible, as fast as necessary.” Think about it.